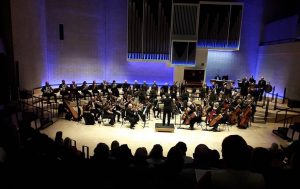 The Gorton Philharmonic Orchestra, Manchester (UK), an amateur symphony orchestra, was formed by the Gorton Philharmonic Society in 1854, three years before Manchester’s Hallé Orchestra. It presents Subscription Concerts at various venues including Holy Innocents Church in Fallowfield, Manchester and the orchestra now has a regular venue at Gorton Monastery for concerts in December and July each year. These are popular concerts and usually sell-out well before the concert date.

We currently have vacancies for string players,. If you are interested in joining us, please email us at secretary@gortonphil.co.uk with details of your playing standard and experience.

Our orchestra is the oldest in the North West (founded in 1854).

We give six concerts each year, three of which are in the Gorton Monastery. Our professional Orchestra leader is John Resek, who is an ex-BBC Philharmonic player.

We rehearse on Sunday mornings from 10:15 to 12:30 more information available here.

The orchestra was founded in 1854, only 27 years after the death of Beethoven, when Tchaikovsky was a boy of 14 and three years before the birth of Edward Elgar. This makes the orchestra one of the oldest in the North-West of England, being three years older than the Hallé Orchestra.

It was originally founded by a group of Gorton musicians who met in a Mr. Blackshaw‘s house in Brook Green Lane, Gorton, Manchester. The group initially augmented the organ accompaniment at the Aspinal Nonconformist Chapel but then enlarged to become the original Gorton Philharmonic Orchestra.

The orchestra has met regularly ever since at various places in Gorton and Reddish – at Aspinal Smithy, over the old Pomona Hotel at the corner of Reddish Lane, in the old Gorton Town Hall and, for many years, at Belle Vue Gardens, Manchester, first in the Ballroom and then in the King‘s Hall.

From 1887, the orchestra gave concerts at Belle Vue and continued to do so through the two World Wars. Originally concerts were given on the first Sunday in the month from 11.a.m. to 12.30.p.m. between May and October. In July 1945, the Belle Vue management requested that the concerts be in the evening and so the series of “open rehearsals” were started.

Concerts were held at Belle Vue, the Free Trade Hall, the Renold Theatre and at Manchester Town Hall. The last concert at Belle Vue was held in September 1977 and, until December 2001, Stockport Town Hall was the venue for the concerts. In 2002, concerts were presented in the Concert Hall at Parrs Wood High School, East Didsbury, Manchester and from 2003, the concert venue has been the Forum Theatre, Romiley, Stockport. In 2007, the Trustees of the newly restored Gorton Monastery invited the orchestra to present a Summer Concert, which was a great success. Since then the orchestra has presented an afternoon concert in the Monastery in July each year and in 2009, it was invited to inaugurate a Christmas Carol Concert in December at the Monastery. The concert sold out weeks before the event and hopefully, will be the first of many Christmas Concerts involving Gorton Philharmonic Orchestra.