Born in 1994, violinist Alla Petrichei began her studies in Romania at the ‘George Georgescu’ Music School in Tulcea and then at the ‘Octav Bancila’ Special Music School in Iasi. In 2011, she was awarded a full scholarship to attend St Peter’s School in York where she studied with Nia Lewis. Alla is currently a scholar at the Royal Northern College of Music in her third year studying with Leland Chen.
As a soloist, Alla has performed internationally in the UK, USA, Austria, Hungary and Ukraine, in concert venues such as the Leeds Town Hall, the Sage Gateshead and the ‘Mozarteum’ Universitat in Salzburg. Her competition achievements include the St Peter’s Music Award and the Farnham ‘Young Musician of the Year’ Award. Alla has also participated in masterclasses with Jack Liebeck, Remus Azoitei, Ben Holland and Sherban Lupu. She has featured on Romanian National Television on several occasions and has played in the prestigious ‘George Enescu’ International Music Festival, Bucharest.
As a member of several chamber groups touring internationally, Alla has recently had the honour of being invited to perform with her duo at the Romanian Consulate in Odessa, Ukraine. She has had considerable orchestral experience and has participated in a masterclass with French conductor Olivier Robe. She has performed in the Leeds Town Hall as leader of the St Peter’s School Symphony Orchestra and with the RNCM Symphony Orchestra at the Cantiere Internazionale d’arte Festival in Montepulciano, Italy. 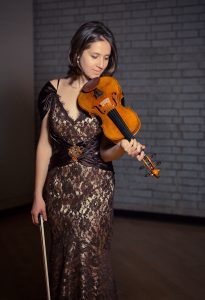