Daniel Ropota is a Romanian piano student in second year at the Royal Northern College of Music from Manchester and has professor Helen Krizos as principal study tutor. He was awarded an entrance scholarship for his first academic year (2015/2016).

His past high school years are marked by a total of twenty four prizes from different piano competitions from countries like Romania, Italy and Hungary.
In 2013, he was awarded by the Education and Training Inspectorate from his hometown in gratitude for his contribution to the prestige of the city of Iasi (Romania), by exceptional results at national and international competitions.

Since he came in Manchester, he has an active schedule. He performed in various competitions and solo and chamber music recitals, in venues such as St. Ann’s Church, Cross Street Chapel and St. James and Emmanuel Church. He was commended by different tutors for his contribution in lectures and classes, thus showing his will to continuously perfectionate. 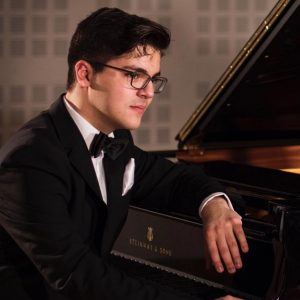