Marco Bellasi has studied violin, composition and conducting at the Conservatoire Giuseppe Verdi of Milan and has graduated with a Masters degree in conducting at the Royal Northern College of Music in Manchester.
He has just been appointed as the new Junior-Fellow conductor at the Royal Northern College of Music in Manchester; the panel for his Junior-Fellow audition included Sir Mark Elder CBE. Next year he is going to have Masterclasses with Sir Mark Elder and a session with him and the Hallé Orchestra.
Marco has been selected as active participant to the 2013 Orkney conducting course organized within the St. Magnus Festival in Kirkwall (Scotland) with teacher Martyn Brabbins and where he conducted the BBC Symphony Orchestra.
He participated as active participant in the Masterclass of the Accademia Chigiana of Siena with Gianluigi Gelmetti and the Sofia Festival Orchestra in 2010. He also has participated as an active participant to the Järvi Academy summer Academy 2012 with Neeme Järvi, Parvo Järvi and Leonid Grin winning the prize from Pärnu City orchestra as the Orchestra’s favourite.Marco made his debut conducting a full stage production of Puccini’s La Boheme at the final concert of the lyric opera laboratory at the Conservatoire of Milan with the Orchestra UECO of Milan obtaining good reviews from the critic Lorenzo Arruga in the national Italian magazine ‘Panorama’. His repertoire includes symphonic, opera and contemporary music. He has conducted Steve Reich’s Eight lines with the RNCM New Ensemble in the presence of the composer in the RNCM Theatre in Manchester. He has collaborated as a conductor with the well known tango group ‘Tango Astillero’ from Buenos Aires and with the famous British Jazz singer Jacqui Dankworth.
After graduating in conducting with a bachelor’s degree in 2007 from the conservatoire of Milan he was accepted in the conducting Masters course in the Royal Northern College of Music in Manchester where he studied two years under the guidance of teachers Clark Rundell and Mark Heron.
He also had lessons from visiting teachers such as Mark Shanahan, Gary Walker, Paul Mann and Jac Van Steen. He graduated with distinction and in his final recital he conducted a concert with Manchester Camerata. He has conducted the Stockport Symphony Orchestra in a programme that included Beethoven’s symphony No.5.
Marco’s musical preparation also includes a bachelor’s degree in violin in the conservatoire of Milan, playing in orchestras such as the ‘Orchestra Nuova Cameristica’ of Milan and the ‘Orchestra Filarmonica del Conservatorio G. Verdi’. He has studied composition with teachers such as Luca Francesconi and Fabio Vacchi. He has also worked as a free-lance lyrical singer and has sung also numerous times as a soloist in the Auditorium Giuseppe Verdi of Milan in the concert season of the ensemble ‘La Verdi Barocca’ conducted by Ruben Jais. He has sung the role of Don Basilio in Il Barbiere di Siviglia of Rossini in the ‘Teatro Piccolo’ of Brescia. He sang as a member of a small chamber choir, ‘Il canto di Orfeo’ for a production of the contemporary opera ‘A Dog’s Heart’ by A. Raskatov in the Teatro Alla Scala of Milan in 2013, the production was conducted by Martyn Brabbins and stage direction was by Simon McBurney. 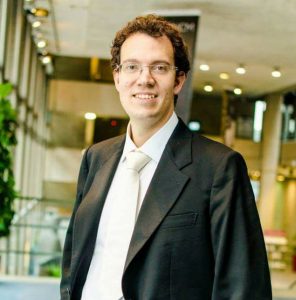