Olivia Doflein, born in the Netherlands, moved to London in 2009 to study at the Royal College of Music, where she completed her Bachelor as well as her Master degree with First Class honours as a pupil of Natalia Lomeiko, with generous support of a.o. the Prins Bernhard Cultuurfonds and Stichting Niemeijer Fonds.

She was crowned winner of the Young Soloist Award 14/15 by the Goois Symfonie Orkest in the Netherlands, and has won first prizes at the Brighton & Hove Music Festival, North London Festival, the Marlow Music Festival, Hatfield & District Music Festival in London and at the Mozart di Terni Festival in Italy. She has participated in masterclasses with a.o. Zakhar Bron, Shlomo Mintz, Gordan Nicolic, Alina Ibragimova and Pavel Vernikov and was chosen to participate in the Crans-Montana Classics masterclass by Shlomo Mintz in 2015.

She has performed as a soloist and chamber musician across England and the Netherlands at such prestigious venues as Amsterdam Concertgebouw, Muziekgebouw Frits Philips Eindhoven, Wigmore Hall and Cadogan Hall. She has a busy concerto schedule and the season of 14/15 saw her professional debut with De Havilland Philharmonic Orchestra in the UK, performing Prokofiev’s 2nd violin concerto, as well as her German debut in May with the Brahms concerto.

Her orchestral activities include performing at the Royal Albert Hall as the co-concert mistress of the English Chamber Orchestra, and in the RCM Symphony Orchestra under Bernard Haitink, Vladimir Ashkenazy, Edward Gardner, Vladimir Jurowski and John Wilson. 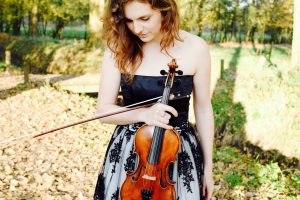