Oswald Edward Wallis joined the Gorton Philharmonic Orchestra as a violinist in November 1922 and became leader of the second violins prior to his appointment as Musical Director in 1935. He was a designer with a Manchester textile firm and he had received his early tuition on the violin at the Manchester School of Music. His deep knowledge and understanding of music, particularly orchestration, was derived from years of intense study in the Henry Watson Music Library, at lunch time and in the evening, at home. Oswald Wallis had held the Deputy Conductorship during the two years of E.C. Pickerell’s time as Conductor and from 1935, when he was appointed Musical Director, the orchestra achieved a high standard under his direction. In 1936, the BBC recognised his great abilities by permitting him to conduct the Northern Wireless Orchestra when they performed one of his own works – Caprice in G minor. He was made a Life Member of the Society in 1956 in recognition of his services as Musical Director. He had the Honorary Degree of Master of Arts conferred on him on 5th July 1957 by the University of Manchester, for services to music.
He finally resigned as Musical Director in 1958, because of illness, necessitating a serious operation. He was made an Honorary Vice-President in 1959 and he died in 1973, after a long, brave fight against cancer. In the Society’s music library there is still an orchestral work composed by Oswald Wallis, his Festival Overture, which the orchestra played in a concert in 1984. 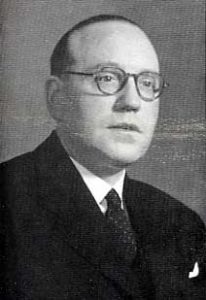