In the 1950s he was a pupil of Bert Brooks, the best known clarinet player in the Hull area, who was then in his seventies and still active leading big bands, Benny Goodman style. Playing in many types of ensemble, including the East Riding Youth Orchestra, jazz band, dance band, military band and salon orchestra, developed his wide interests in music. Moving to the Manchester area in 1958, he soon became the principal clarinetist and bandmaster of the Adamson Military Band in Dukinfield.

As a conductor, he has directed amateur operatic performances, military bands and was the musical director of the Trafford Light Orchestra with whom he conducted over 500 concerts. Currently he plays the clarinet with the Gorton Philharmonic Orchestra and the Dorian Wind Ensemble.

Richard has recently retired from leading the commercial activities in the Faculty of Technology at Bolton Institute, where he was also a principal lecturer in computer engineering. He is now developing new interests and renewing neglected ones, for example, photography, walking and developing bread-making recipes. Since retiring Richard has been making transcriptions and arrangements for wind quintet and, of course, for clarinet. 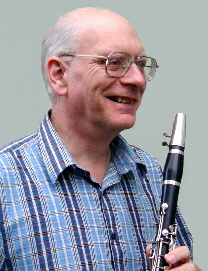